Normally gluten-free cooking baking is associated with heaviness, toughness and not giving the delightful crumb you get with baking with gluten-based flours; however, I’ve been playing around with GF baking for a couple of years now, learning little tricks and secrets to get results which trick people into thinking that you have used gluten. After being diagnosed with coeliacs earlier this year, it has given me the push to experiment even more with GF baking and cooking, much to the delight of my friends.

When doing GF baking, it is essential to use flours and liquids which have a good amount of protein in them – the protein provides much needed structure and springiness to a mixture, along with the right amounts of xanthan and/or guar gums. For GF flour, I use the Macro Wholefoods GF Plain Flour mix, which has the highest amount of protein per 100g compared to other mixes; it also gives the most consistent results with baking and has been perfect for cakes, cupcakes, biscuits, slices and scones. For the liquid component, I always use soy milk or the Vitasoy Protein-Enriched Rice Milk (it has added chickpea protein) which adds even more protein to the mixture. If you use another type of rice, oat or almond milk, you will not get the results I get (believe, I have tried them all!). Another thing to take into consideration is the amount of raising agent used. Because you do not have the gluten to create ‘strings’ in the mixture when it cooks, which normally helps trap air bubbles and give lift, you have to use extra raising agent.

The following recipe fooled Jessie into thinking she was eating a cupcake made with a gluten-based flour; alas, it was made with the best pre-mixed GF flour I have come across over the years. 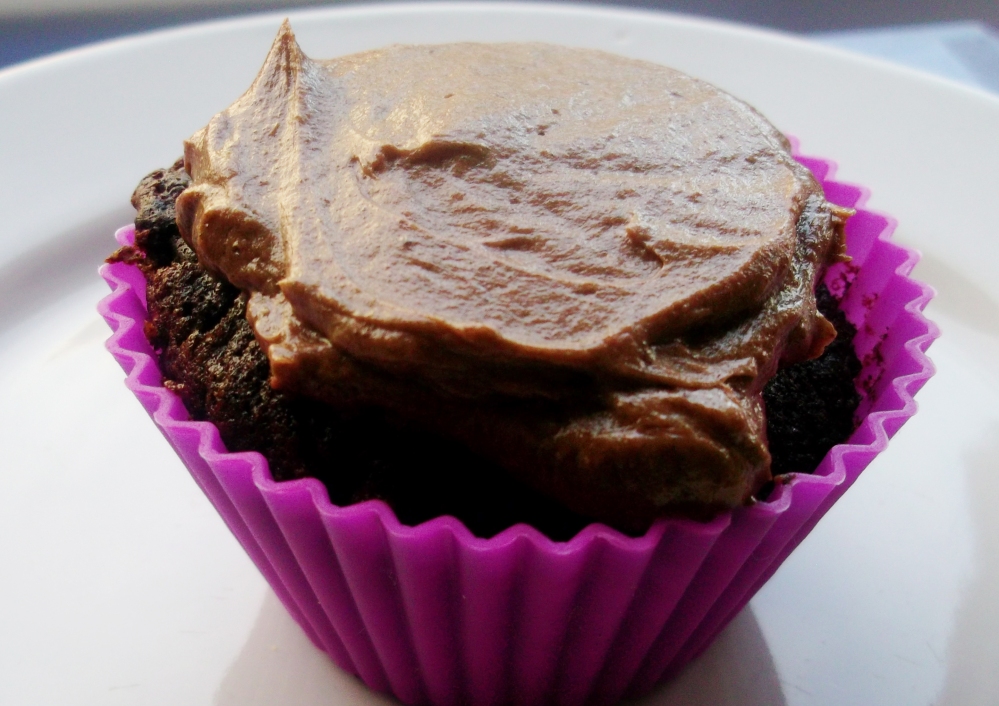 2. In a bowl, place soy milk and vinegar together. Wait for a minute, then add oil and vanilla essence. Set aside (the vinegar reacts with the protein in the soy milk, which will result in a nice, fluffy cupcake).

3. In a large bowl, sift together all dry ingredients. Then get a large spoon and ensure the dry mixture is thoroughly mixed.

4. Make a well in the centre of the dry mixture. Pour in wet ingredients and mix until well incorporated.

5. Fill cupcake liners/cups until three-quarters filled. Place in oven and bake for 25-35 minutes. Check cupcakes 20 minutes into cook time, as sometimes they will cook quicker, depending on your oven. Allow to cool.

In a bowl, sift together icing sugar and cocoa powder. Add margarine and mix until well incorporated, light and fluffy. Add vanilla essence and whip again. Put on cold cupcakes.